An equal-loudness contour is a measure of sound pressure level (SPL), over the frequency spectrum, for which a listener perceives a constant loudness when presented with pure steady tones. The unit of measurement for loudness levels is the phon and is arrived at by reference to equal-loudness contours. Additionally, the phon unit shows the actual SPL (in decibels) of the pure sine wave at the 1000 Hz frequency. By definition, two sine waves of differing frequencies are said to have equal-loudness level measured in phons if they are perceived as equally loud by the average young person without significant hearing impairment.

The figure below illustrates the measured equal loudness contours for previous standards - Fletcher and Munson (published in 1933) and Robinson and Dadson (published 1956) and the actual ISO 226:2003 standard published in 2003: 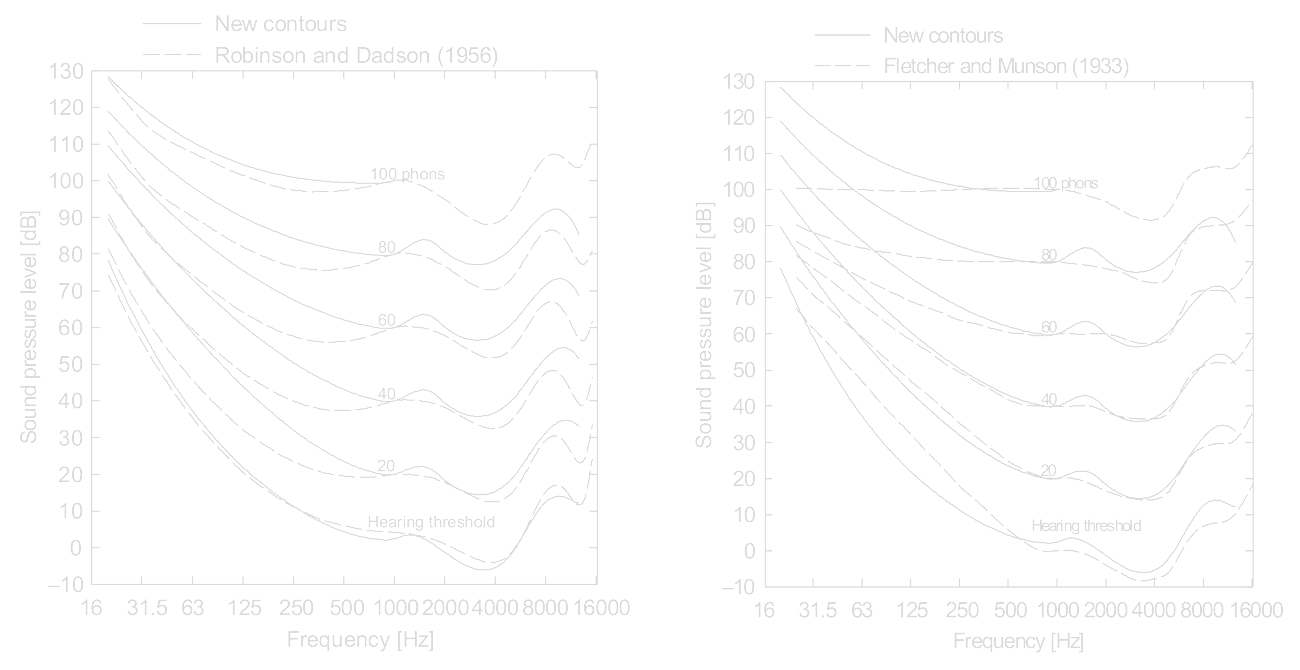 The equal loudness contour curves show two aspects of the way sounds are perceived. For one, sounds at different frequencies need to have substantially different SPL levels to sound equally loud so that, for instance, a 30Hz sinewave and hence the 30Hz content of any sound in general needs to be more than 10 db SPL louder than the 1000Hz content to sound equally loud, when the latter is at 100 dB SPL, i.e. at 100 phon.

The upshot of this in practice is that if a track was mixed to sound a certain way at, say 83 dB SPL, i.e. with the equipment set up so that it will reproduce a 1000 Hz tone at 83 dB SPL, then it will no longer sound the same when listened to at lower levels, as the bass and treble content will sound less loud than the midrange content. Conversely, if it was mixed at lower levels, but reproduced at higher levels, bass and treble content will be boosted.

Usage of equal-loudness contours solves many mixing problems that every sound engineer meets while working on the track. The main problem is that human ear perceives different frequencies for different volume settings in a different way. In other words, applying changes to the mix on the low volume settings may cause unexpected (sometimes horrible) sounding of the mix at the maximum loudness.

To avoid this, the calibration of the audio system is peformed, so the digital signal with the maximized loudness gives a 83 dB SPL level at the output. The 83 Phon equal loudness curve (can be linerarly approximated from other curves on the figure) is considered having flat frequency response, frequency responses for other SPL levels are computed by subtracting the corresponding equal loudness curve from the 83 phon curve.

Preparing the sound system for work.

The plugin assumes the 83 phon equal loudness curve being a flat frequency response. For that case the audio system needs to be callibrated for the 83 dB output loudness. The plugin can generate a 0 dBFS sine wave digital reference signal at 1000 Hz which can be reproduced by the audio system and measured by the SPL meter.

Since measuried signal at 1 kHz matches the same loudness level in phons, the amplification knob of the audio system should be adjusted to reach the 83 dB SPL level on the SPL meter. After that, the Volume knob can be used to attenuate the overall loudness of the system while preserving equal loudness perception by the ear.